Historically, the English used stereotypes of other animals to variously portray the Irish as wolfish, simian, and swinish. But this common colonial practice of using animal Others to debase human Others in order to cast the Irish as incapable of self-government and in need of civilizing is countered in much Irish poetry through an embrace of premodern ways of knowing and representing other animals. Miranda Green has defined the status of animals in ancient Celtic societies “as sacred and numinous, whether in possession of divine status in their own right or simply acting as mediators between the gods and humankind” (3). Just so, the figure of the shape-shifter in the early Irish sagas travels between human, animal, and spirit worlds, blurring the boundaries and acquiring supernatural powers. This class explores animal representation in Irish poetry and culture from the shape-shifters of the sagas to the Celtic Tiger of recent years. As we make our way through the escalating crises of the Anthropocene and the sixth mass extinction brought on by the mechanistic world view of modernity, such Irish poems can reacquaint us with an organismic vision of interrelation among species, a vision necessary for the survival and flourishing of human and animal alike. In the process, these poems also invite new ways of reading: an animal poetics. Our assignments will include poetry by W.B. Yeats, Seamus Heaney, Eavan Boland, Paul Muldoon, Paula Meehan, Moya Cannon, Ciaran Carson, Eammon Wall, and Sinéad Morrissey, among others. Requirements include poetry explications, presentations, and a final paper. 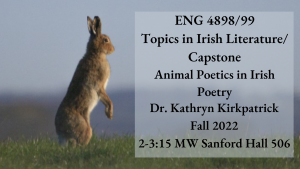 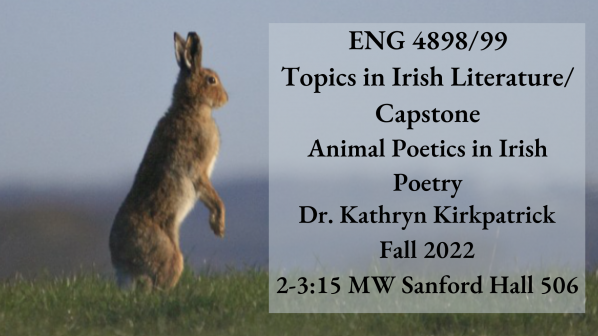