Explore American literature during the Gilded Age — the age dominated by literary realism, regionalism, and naturalism.  In addition to a few shorter works by writers such as Stephen Crane, Jack London, Mary Wilkins Freeman, and Charles Chesnutt, we’ll read Mark Twain’s A Connecticut Yankee in King Arthur’s Court, Henry James’s A Portrait of a Lady, William Dean Howells’s The Rise of Silas Lapham, Edith Wharton’s The House of Mirth, and Willa Cather’s My Ántonia.  We’ll try to place these texts against a historical background of explosive industrial growth, the emergence of vast wealth and terrible poverty, the urbanization of America, rampant political and corporate corruption, the failure of Reconstruction in the South, the closing of the frontier, and the emergence of the U.S. as a global (some would say, imperial) power.  We will explore how such forces shaped national, racial, class, and gender identity for Americans during the period, and we will consider the intellectual influence on American literature of some of the major thinkers of the period: Charles Darwin, Herbert Spencer, Karl Marx, Friedrich Nietzsche, and William James. 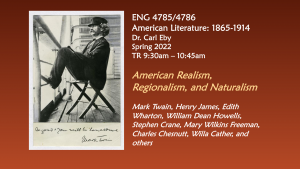 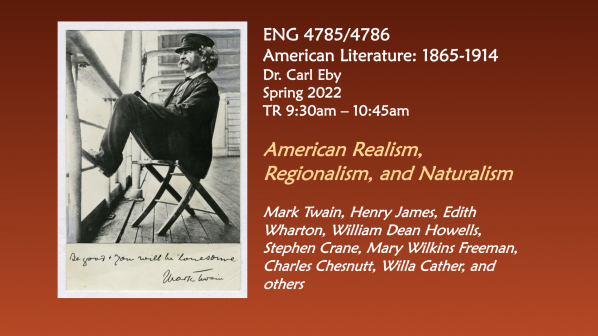