On March 31st a new film titled Climbing Every Mountain will be released in celebration of national Transgender Day of Visibility. The film is about raising awareness for members of the trans community in the Appalachian region and their need for physical and medical health care. Filming is done by the group Transilient and is supported by PFLAG a national organization dedicated to supporting transgender Americans.

The project started in 2018 when James Heatherly, Climbing Every Mountain's director, got the idea while finishing the group's last project. He went to social media to see if anyone would be interested in the series "and the response was enormous. People were wanting this series and expressing how needed it was." Immediately the team began filling out applications for funding and it was during this period a partnership with PFLAG came to fruition.
From there the team began to plan their route and set up the actual path for the project. When commenting on the goal for the route, producer Jayce Jefferson said: "We honestly just looked for people with different stories. Someone for everyone. I wanted people to watch this documentary and see themselves, whether that was a struggle they faced with a doctor, family problems, etc." People were found to interview through a shareable Google form, with much of the awareness coming through social media outlets. Other organizations such as Queer Appalachia, Discovering Gender and, TransfigurePrintCo also worked to raise awareness and get people involved in the project. Heatherly said, "it was really a community effort."
It was around this time that Appalachian alumni Kalvin Benfield filled out an application for the interview and shortly after saw that the Transilient team was in need of an Outreach Coordinator and Social Media Manager. He applied and was accepted to the position. Kalvin is ecstatic about being part of the project and said

"I struggled with my mental health for a long time, unable to find support, unable to access resources. I don't want that for those coming after me. I want their physical and mental needs to be met in an easy and accessible way. We all do, and that's why this project is so important to us. We want our community's voice heard and change to be made."

Post-production on the project is almost finished and the team is very excited for the release at the end of the month, and excitement seems to be brewing. Benfield summed it up by saying "In short, we all deserve to be heard. We all deserve to be understood. We do NOT deserve to be silenced or erased, and Climbing Every Mountain is making sure that trans and nonbinary people in Appalachia have their voices lifted and projected."
Susan Weinberg of our department is in contact with the team and is making a push for the film to be shown on campus once it is released. We wish the team the best and hope to see the film on campus soon! 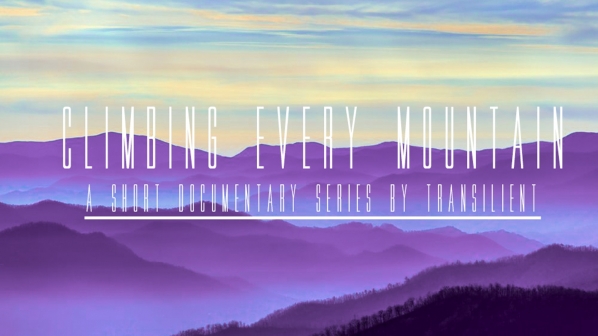