On Sunday, February 14 the Hayes School of Music and the Department of English presented a concert and poetry readings celebrating Black History Month, promoting pride in black heritage, equality, and social justice. Both well-known and original poems were performed by faculty and students alongside various genres of music.

The evening was both insightful and entertaining while opening an avenue of expression for POC voices. The music, all composed by African American composers, featured instruments such as the piano, tuba, violin, and clarinet. They all came together and created a wonderful concert to which the online chat applauded with clapping emojis and lots of comments commending the performances.

The poets were profoundly moving and transported the audience into a different world with their words; such as when our own department chair, Dr. Leonardo Flores, performed "The Tropics in New York" by Claude McKay, reading

"Bananas ripe and green, and ginger-root,
Cocoa in pods and alligator pears,
And tangerines and mangoes and grape fruit,"

Here is a link to the recorded concert.

Even if poetry isn't your cup of tea, consider the words from Lloyd Oppong's poetry reading of Ted Joans' "The Truth"

don't run
in the opposite direction
but run towards him
for he is a POET!
you have NOTHING to fear
from the poet
but the TRUTH

The next live-streamed concert celebrating Black History Month is on Feb. 21 at 4 PM, EST. Some of the featured composers include Scott Joplin, Billie Holliday, and Jelly Roll Morton. We are looking forward to performances by Oprah Whitfield, MyFawny Hull, Leon Lewis, and Bruce Dick who will be reading poems by Gwendolyn Brooks, Michael S. Harper, and other black poets. 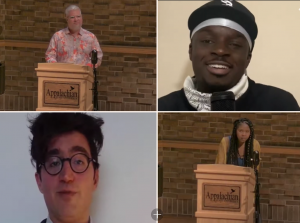 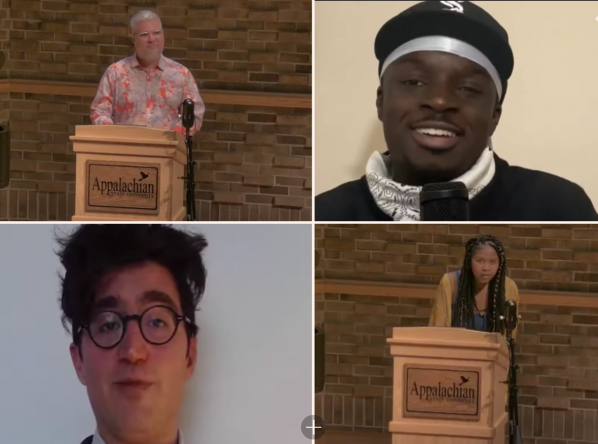 A collage of the poetry readers at the Feb. 14 BHM event.