Alex Pitofsky joined the ASU English faculty in 2001. His scholarship, which usually focuses on the novel and on British literature, law, and history in the Restoration and the 18th century, has appeared in Studies in Eighteenth-Century Culture, Eighteenth Century Life, Postmodern Culture, Twentieth Century Literature, The Mark Twain Annual, Studies in American Culture, and other publications.

American Boarding-School Fiction, 1981-2021: Inclusion and Scandal (forthcoming from Lexington Books, an imprint of Rowman & Littlefield, in 2023)

"Masculine Competition and Boarding-School Culture in The Catcher in the Rye," Studies in American Culture 34.1 (October 2011): 67-85.

"Discipline and Profit in the Prison-Industrial Complex," Postmodern Culture 12:2 (January 2002).

"'No Retiring from This': Dreams of Escape and the Last Season of The Sopranos," Magazine Americana (2010) <http://www.americanpopularculture.com/television.htm>.

"The West Wing and the Living Dead: An Interview with Dale Bailey," Tabula Rasa (2006) <http://www.tabula-rasa.info/Horror/DaleBailey.html>. 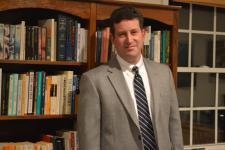