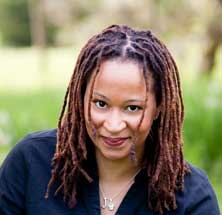 Link to reading and craft talk will be posted Thursday, October 8, at noon.

Jacinda Townsend recently served as the Appalachian Writer in Residence at Berea College. She is the author of Saint Monkey (Norton, 2014), which is set in 1950s Eastern Kentucky and won the Janet Heidinger Kafka Prize and the James Fenimore Cooper Prize for historical fiction. Saint Monkey was also the 2015 Honor Book of the Black Caucus of the American Library Association.

Townsend grew up in south-central Kentucky and took her first creative writing class at Harvard, where she earned her B.A. While at Duke University Law School, she cross-registered in the English department and took several formative writing workshops. In 1999, after four years as a broadcast journalist and then a lawyer in New York City, Townsend went to the Iowa Writers’ Workshop, where she received her M.F.A. She spent a year as a Fulbright fellow in Côte d’Ivoire. Her recently completed novel, Kif, will be published in by Graywolf Press in 2022.

Townsend previously appeared in the Hughlene Bostian Frank Visiting Writers Series in Fall 20I9 and will serve as the 2020-2I Rachel Rivers-Coffey Distinguished Professor of Creative Writing at Appalachian.
Honoring the late newspaperwoman and writer Rachel Rivers-Coffey, the Rachel Rivers-Coffey Distinguished Professorship in Creative Writing annually sponsors the residency of a writer of national prominence at Appalachian State University. This position rotates among various distinguished authors of all creative genres; distinguished professors teach a creative writing seminar, conduct community outreach and are featured annually in the Hughlene Bostian Frank Visiting Writers Series.